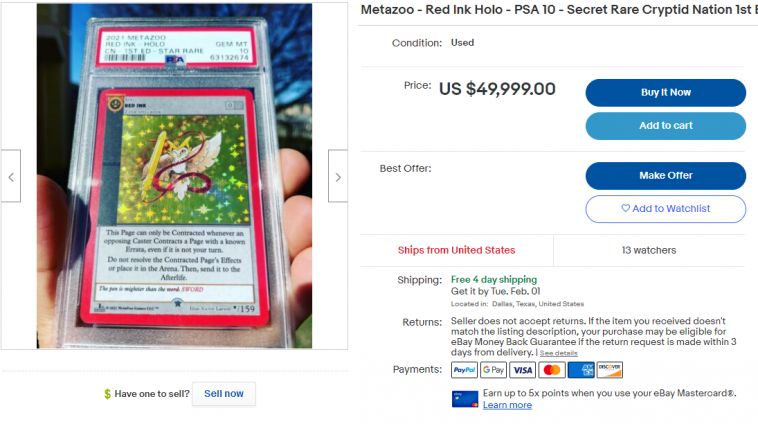 Since the initial launch on Kickstarter almost a year ago, the MetaZoo card game has been scooping up market share left and right. While the insane value of the earlier booster boxes are well known, some readers might still be wondering: what is the most expensive MetaZoo card?

Answering this question required some investigative journalism. As someone who is fairly bullish on the MetaZoo card game, even I was surprised to learn that MetaZoo has some of the most valuable cards in the entire TCG industry. Historical eBay data shows that many competing card games may have higher list prices — but finding actual sales at these prices is virtually impossible. When it comes to completed transactions, MetaZoo is in the lead.

Illustrated by the artist Victor Larson, Red Ink is the chase card of the Cryptid Nation 1st Edition set. These cards were hidden inside special packs known as Box Toppers. Within the last 90 days, eBay shows transactions taking place for $9,100 (PSA 8) and $10,100 (PSA 9). A PSA 10 version of the card is currently listed for $50,000.

Belonging to the Nightfall set, Old Scratch might be even more exclusive than Red Ink. Only 100 of these cards were printed and the known condition on many of them is not great. This means that the pristine examples are far more exclusive than fans originally expected. Within the last 90 days, PSA 9 versions of the card sold for an average of $12,000 with a PSA 8 fetching $6,900 just a few weeks ago. No PSA 10 versions of the card are known to exist currently.

It’s important to note that the above list only contains commercial cards. In other words, I did not include any of the exclusive sample cards, promo cards, or autographed cards — all of which have comparable market values as well.

It should also go without saying that eBay is obviously not the ultimate authority on all transactions within the TCG industry. Many transactions could have taken place offline or in competing marketplaces. With that being said, eBay does seem to provide an accurate overview of market prices.

Tell us what you think below. Will Old Scratch continue to be the most valuable card or will the new MetaZoo Wilderness Set have something even more exclusive? 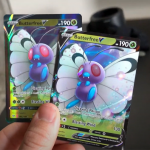